Though it may seem easy, the task of buying a coffee maker often proves to be rather tricky. Especially when your budget isn’t the biggest one and your counter space is limited.
And so you stumble upon different machines, and then, one of them catches your eye. Compact, good looking and good array of functions. But is it the one?
Read through this Delonghi ec680 review in order to find out just what this espresso machine offers, and see for yourself if you should add it to your kitchen appliances collection.

Features of the Delonghi EC680 Dedica

I’m sure you’re aware of the important role design plays when it comes to any coffee maker. The main problem with coffee makers, in general, is that they tend to be too big for your kitchen.
Well, this one was specifically made to fit in small space, limiting the footprint, so you won’t have to dwell on having an espresso machine or toaster in your kitchen.

It’s a bit taller, but super slim (astonishing 6 inches) and would be great for small apartments, studios or even dormitories.

The machine isn’t heavy which makes it more convenient for transportation and if you move a lot. No one likes a bulky cinder block that requires a ton of effort just for a cup of coffee. Its weight does make it wriggle a bit sometimes, though.

Single thermoblock boiler is really fast (ready to use in under 40 seconds) and the transition from brewing to steaming takes only 15 seconds. So that’s pretty impressive.

Small tip: to speed up brewing after steaming just run some water through the steam wand and this will cool down the boiler making the machine ready to brew straight away.

For its price point, Dedica offers many features that can be found in more expensive models like preinfusion and wait time before brewing. This will allow for better shots and enhanced aroma.

On the other hand, it doesn’t feature a solenoid valve so you’ll have to deal with a wet puck, which is a bit messy but you shouldn’t really expect it for that price.

The machine has a lot of programmability which is great considering its price. This definitely is a huge plus compared to other machines in this price range.

Programming the buttons is also fairly easy to do, so you shouldn’t have any problems. However, if you do there are plenty of tutorials online to help you out.

You can program the temperature(3 settings) and volume of the coffee shots (for a single and for a double) which is great as it helps you to dial in the shots for your own preference.

The machine is also able to shut down on its own- the timer is set from 9 minutes up to 2 hours.

And finally, you can set automatic descaling which comes in handy more often than you’d think so you have one less thing to remember.

Every machine needs a steaming wand, and this one is equipped with the Pannarello wand which features a rubber handle for more convenient use.

It’s foolproof, and does the steaming for you, without burning your fingers. This is great for all those users who have never used an espresso machine before.

A lot of movement is allowed so you can easily get the frothing pitcher into the desired position. However, I wouldn’t go overboard with the size – 16oz would be perfect.

If you want to cut down the waiting time between steaming and brewing, you can simply run some water through the steam wand. This cools the boiler down, cleans the nozzle, and warms up your cup.

What else you should know about the Delonghi EC680

Before any purchase, it’s important to see how others are satisfied with the product you intend to buy so you know you’re not wasting your money. This is one of the reasons everyone’s glad the internet exists. Simply put, it allows you to see all the numbers, recommendations, and statistics without leaving the comfort of your home.
So, what did our customers say about the Delonghi ec680 coffee machine?

So we’ve covered the basics including the perks and disadvantages of the Delonghi ec680, and now you can see for yourself if it meets your needs.
Overall, this is fast, slim, and easy to use machine. Great for beginners and those who don’t want to improve their barista skills but want to be more hands-on with coffee making.

As for cons. If you buy a machine that isn’t faulty (and you don’t have to deal with customer service)and learn how to make a decent espresso you should be very satisfied with this little guy. Like with all semi-automatics it has a learning curve but I’m sure nothing that is too complicated for average espresso drinker.

If you look through negative reviews you’ll find that most of them say about a faulty machine and poor customer service which can happen and usually happens a lot when you buy any kind of appliance. For those users that were lucky to get properly working machine, it was a matter of personal preference to say if they liked it or not.

Bear in mind it’s an entry-level machine that won’t produce espresso like the commercial ones in the coffee shops, but it has a lot of nice features for its price that definitely makes it an attractive option among many models available on the market. 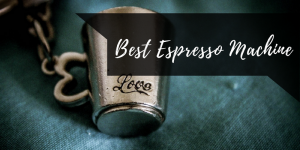 The owner of this website, The Coffe Maestro, is a participant in the Amazon Services LLC Associates Program, an affiliate advertising program designed to provide a means for sites to earn advertising fees by advertising and linking The Coffee Maestro to Amazon properties including, but not limited to, amazon.com, endless.com, myhabit.com, smallparts.com, or amazonwireless.com.
This website uses cookies to improve your experience. We'll assume you're ok with this, but you can opt-out if you wish.Accept Reject Read More
Privacy & Cookies Policy

This website uses cookies to improve your experience while you navigate through the website. Out of these, the cookies that are categorized as necessary are stored on your browser as they are essential for the working of basic functionalities of the website. We also use third-party cookies that help us analyze and understand how you use this website. These cookies will be stored in your browser only with your consent. You also have the option to opt-out of these cookies. But opting out of some of these cookies may affect your browsing experience.
Necessary Always Enabled
Necessary cookies are absolutely essential for the website to function properly. This category only includes cookies that ensures basic functionalities and security features of the website. These cookies do not store any personal information.
Non-necessary
Any cookies that may not be particularly necessary for the website to function and is used specifically to collect user personal data via analytics, ads, other embedded contents are termed as non-necessary cookies. It is mandatory to procure user consent prior to running these cookies on your website.
SAVE & ACCEPT